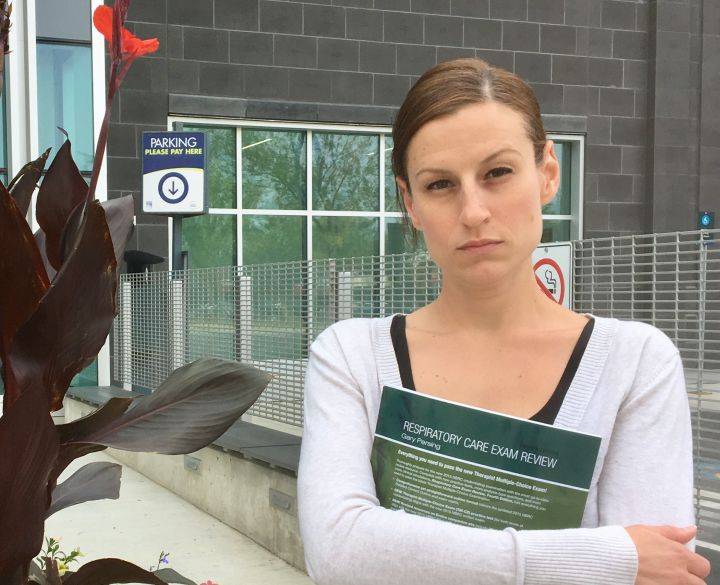 Hundreds of recent respiratory therapy graduates from across the country have been left frustrated following a delay with their licensing exam and what they say are mixed messages from the company involved, according to a graduate of the program at Edmonton’s Northern Alberta Institute of Technology (NAIT).
On July 9, a “critical failure” of the exam delivery system prevented 388 graduates from completing their licensing exam, said Edmonton-based Yardstick Assessment Solutions, which administers the test.
The exam is required by the Canadian Board for Respiratory Care for respiratory therapists to gain their full licences and to be able to collect the full pay of a registered therapist.
“We deeply apologize for this situation,” Isabelle Gonthier, the president and chief operating officer at Yardstick, said on Tuesday. “We are working with candidates. We want to make sure that everything is done as possible to have them sit for the exam.”
Keri Horton, who recently graduated from NAIT’s respiratory therapy program, said she was working on the test for about an hour when it started to freeze.
“We sort of feel like we’ve been cheated out of something,” Horton said. “Not just in the fact that we’ve had to wait and there’s been a delay now in receiving our titles and our wages, but just the fact that this was something we’ve worked toward for three years.”
Respiratory therapists can work on a temporary, provisional licence before passing the licensing exam, according to Horton. She said people in that situation receive 90 per cent of the wage they would otherwise be paid.
Compensation
In an email dated July 12, Yardstick offered affected graduates a full refund of the test fee of $899 plus tax, along with out-of-pocket expenses.
Last week, Yardstick revised its plan, lowering the refund to $290 plus tax and expenses while allowing those affected to claim lost wages for July 9.
“We’re reimbursing them so they’re not out of pocket. We’re going to be reimbursing the money, but we’re not able to reimburse money that’s not ours.”
According to Yardstick, the non-refunded portion of the fee accounts for money not kept by the company.
Horton believes the company should live up to its initial offer to issue a full refund. She says legal action is an option, but hopes it doesn’t come to that.
“We’re hoping that they’ll somehow realize that right is right and wrong is wrong, and I do believe that they know that what they’re doing is wrong,” Horton said.
What’s next
Recent graduates were offered two dates on which they could retake the exam, according to Yardstick. Some completed the exam on Aug. 13, while others opted to take it on Aug. 27.
The company said those who take the test will receive their results within the original timelines promised with the July 9 test.

SHARE THIS POSTING BY CLICKING ON THE BUTTONS BELOW!